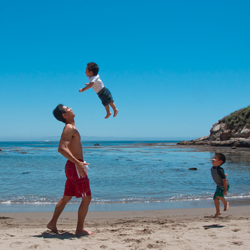 Yoh Kawano came to Los Angeles and UCLA after living across the globe, in 5 different countries. At UCLA he works at the GIS and Visualization Sandbox as a member of the Research Technology Group for the Institute for Digital Research and Education (IDRE), serving as a Research Coordinator for Spatial Visualization. He has supervised projects in urban planning, emergency preparedness, disaster relief, volunteerism, archaeology, and the digital humanities. Current research and projects involve the geo-spatial web, visualization of temporal and spatial data, and creating systems that leverage social media and web services in conjunction with traditional information systems. In the fall of 2015, Yoh enrolled in the PhD program at UCLA’s Department of Urban Planning, where he is engaged in research on disaster ethnography.

Following the Great Tohoku Earthquake in Japan, Yoh has been busy researching the potential that the social web can have in post-disaster relief. In the inaugural TEDxUCLA event in 2011, he spoke of ways that locational technologies, combined with social media, can provide an immediate and real-time opportunity for big and small crisis management. He continues to be involved in the ongoing nuclear crisis in Japan, working as a GIS and visualization advisor for a research project based in Niigata University, and as a filmmaker conducting longitudinal ethnographies, collecting oral histories in Fukushima that has spanned more than six years.

Yoh has co-authored “Hypercities: Thick Mapping in the Digital Humanities”, published in 2014 via Harvard Press. He also directed, produced, and edited “Human Error,” a documentary film that sheds light to the many narratives that percolate the abandoned spaces of Fukushima.

Yoh has an MA in Urban Planning from UCLA and a BA in Sociology from the International Christian University (ICU) in Tokyo.

In his spare time, he can be found at a local beach, practicing his levitation skills with his three sons.