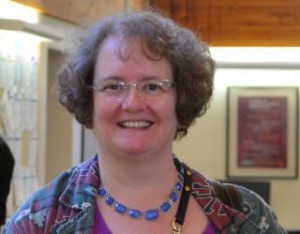 Abstract:
We present new methods for segmentation of large datasets with graph based structure. The method combines ideas from classical nonlinear PDE-based image segmentation with fast and accessible linear algebra methods for computing information about the spectrum of the graph Laplacian. The goal of the algorithms is to solve semi-supervised and unsupervised graph cut optimization problems. I will present results for image processing applications such as image labeling and hyperspectral video segmentation, and results from machine learning and community detection in social networks, including modularity optimization posed as a graph total variation minimization problem.

Speaker’s Bio:
Andrea Bertozzi is an applied mathematician with expertise in nonlinear partial differential equations and fluid dynamics. She also works in the areas of geometric methods for image processing, crime modeling and analysis, and swarming/cooperative dynamics. Bertozzi completed all her degrees in Mathematics at Princeton. She was an L. E. Dickson Instructor and NSF Postdoctoral Fellow at the University of Chicago from 1991-1995. She was the Maria Geoppert-Mayer Distinguished Scholar at Argonne National Laboratory from 1995-6. She was on the faculty at Duke University from 1995-2004 first as Associate Professor of Mathematics and then as Professor of Mathematics and Physics. She has served as the Director of the Center for Nonlinear and Complex Systems while at Duke. Bertozzi moved to UCLA in 2003 as a Professor of Mathematics. Since 2005 she has served as Director of Applied Mathematics, overseeing the graduate and undergraduate research training programs at UCLA. In 2012 she was appointed the Betsy Wood Knapp Chair for Innovation and Creativity. Bertozzi’s honors include the Sloan Research Fellowship in 1995, the Presidential Early Career Award for Scientists and Engineers in 1996, and SIAM’s Kovalevsky Prize in 2009. She was elected to the American Academy of Arts and Sciences in 2010 and to the Fellows of the Society of Industrial and Applied Mathematics in 2010. She became a Fellow of the American Mathematical Society in 2013.