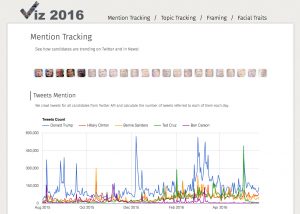 With a collection of recordings from 46 different broadcast networks of 2,500 different television shows that amount to approximately 283,000 hours of footage and 750,000 metadata files, you would be right to say that UCLA Library’s NewsScape has its “eyes and ears” on the media.

Started in 1973 during the Watergate hearings by UCLA professor emeritus Paul Rosenthal, NewsScape serves as a media analysis resource and educational tool that researchers continue to apply in new and relevant ways, including a broadcast news and online media analysis project that tracks the candidates and topics in this year’s U.S. presidential elections.

Viz 2016, a joint project of UCLA’s Center for Vision, Cognition, Learning and Autonomy and the Department of Communication Studies and funded by the National Science Foundation, publishes an online detailed summary of primary election media traffic incorporating data from NewsScape and social media. One of the site’s features is called “Mention Tracking” and reveals how candidates are trending daily in both broadcast news using NewsScape and on social media using Twitter. Tweets are crawled and tallied by the number of mentions of each candidate (spoiler alert: Donald Trump has earned the most amount of mentions in terms of numbers) as well as overall percentage count. “News Mention” time is calculated from the major news networks including CNN, FOX, MSNBC, ABC, CBS, NBC and local news broadcasts. “Positive” and “negative” sentiments are also gleaned from tweets and are tallied for each candidate. “Topic Tracking” performs automated story segmentation and story clustering to create topic maps that researchers can use to make claims about network coverage and news topics that rise to the top.

During its beginnings, NewsScape recorded shows on analog tapes and over the years amassed a few hundred thousand video tapes. When Professor Francis Steen, a member of UCLA’s Institute for Digital Research and Education’s (IDRE) Humanities, Arts, Architecture, Social and Information Sciences Collaborative (HASIS), arrived at UCLA in the early 2000s, he, along with fellow Department of Communication Studies professor Tim Groeling, began the process of changing the format from analog to digital.

By the fall of 2006, the transition to a fully-automated digital system was complete. The files are now automatically sent to and stored in IDRE’s Hoffman2 Cluster, a set of interconnected computers that work together to essentially act as a single and more powerful machine that is used to analyze data. Hoffman2 is currently the largest and most powerful shared cluster in the University of California system and is part of IDRE’s Advanced Computation & Storage Program.

“There’s lot of information encoded in the way the message is modulated multimodally that can completely invert the meaning of words, and you wouldn’t hear it on the transcript,” Steen said.

On the other hand, political communications scholars value NewsScape for content over form. Using the extensive archived materials, they can attempt to correlate something a political figure said to issues like election outcomes, job approval ratings, and measures of public opinion.

“This is in some ways almost like a medical approach to the news, a diagnostic of what’s going on under the surface. We can aggregate, see the bigger pictures, and say something about the health of the system,” Steen said.

Steen has an academic interest in selection bias, in other words what is reported and what gets left out. He said one of the more social justice aspects of NewsScape is the potential to make news media more accountable and fact-based when it comes to issues such as global warming and distribution of wealth in society.

“If the news can’t rise above that that means the public discussion, on the basis of which we make decisions as a participatory democracy, those decisions will be wrong,” he said. “We can be a player and have a voice.”

Outside of human and political communications researchers, NewsScape also works with cutting edge computer science researchers that work in fields like computer vision, audio analysis, and automated language analysis. Besides working on topic trajectories in the news, NewsScape associated researchers are also working on automated face analysis capable of determining facial trait judgments that they’re deploying for the primaries.

With recording stations set up all over the world including California, Ohio, Spain, Germany, and Portugal, the project continues to grow. NewsScape is in the process of setting up a station in Southern Russia. In addition, Professor Groeling has started a project to digitize the original analog tapes recorded by Professor Rosenthal.