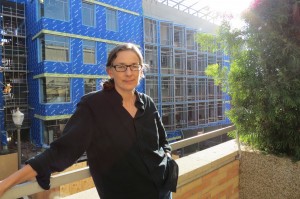 Lisa M. Snyder, a modeling and visualization expert at UCLA’s Institute for Digital Research & Education (IDRE), was recently awarded a National Endowment for the Humanities (NEH) Digital Humanities Implementation Grant to develop new runtime software for interacting with highly detailed, three-dimensional computer models of historic urban environments. The grant is also funding the creation of a repository and archive in conjunction with UCLA’s Digital Library Program.

“The software – known as VSim – was specifically designed to facilitate the use of 3D content in classrooms across the humanities disciplines and across all grade levels,” Snyder said.

Snyder and her co-PI Scott Friedman, IDRE’s Chief Technologist, are excited to take VSim from prototype to production. “Right now we’re working with test users and gathering feedback on our prototype. Once we’ve agreed upon the necessary modifications, Scott is going to be working with our computer programmers to build the final software,” she explained.

VSim has three major functions. First and foremost, it facilitates real-time exploration of 3D content. Using the software, people can explore beautiful churches in cities across Europe, witness the reconstruction of ancient Egyptian temple complexes, and travel back in time to walk the streets of the famed World’s Columbian Exposition held in Chicago in 1893.

VSim also offers a narrative feature, allowing instructors to create linear presentations about 3D environments. Noted Snyder, “Instructors can pre-build presentations that play out similar to PowerPoint or Prezi presentations but in a 3D space.” The innovative software thus makes it easy for professors to fly over a space and lecture at the same time.

Finally, VSim allows users to embed content within the 3D space. “It can be a link to a web resource about the 3D environment, audio files, videos, static images, notes about the computer model, or source material,” she said.

Snyder, who holds a Ph.D. in architecture from UCLA’s Department of Architecture and Urban Design, developed a fascination with the subject at a young age.

“I was always interested in architecture, but I never wanted to be a practicing architect. I was more interested in the history and theory sides of it. I can remember being in third grade and being obsessed with old, strange buildings and houses,” she noted.

Snyder has since turned her childhood obsession into a successful academic career. After earning a master’s degree in architectural history from UVA, she taught for ten years at Woodbury University in Burbank, California before coming to UCLA to pursue a doctorate. Now a valuable staff member and research technologist at IDRE, Snyder wears many hats.

“I work closely with the North Campus faculty through partner organizations, such as the Center for Digital Humanities (CDH) and the Digital Library Program, as well as the leadership of OIT and IDRE to promote digitally enabled research on campus. I also work on my own research,” she explained.

Today, much of Snyder’s research focuses on cutting-edge, instructional technology designed to teach students architectural history – like VSim – something she has been working on for several years.

“The original funding for the VSim project was an NEH Start-Up grant, which gave us just enough money to build a functional prototype of the software,” she said.

Now armed with additional funding from the NEH, Snyder and her team are in the process of taking the prototype and building out a production-level version of the software. They are also collaborating with the UCLA Digital Library Program to develop an online repository and archive for the 3D content.

Use of VSim is not limited to instructors; Snyder also hopes students will take advantage of the useful software. “We intended VSim to be software that could be used with academically generated models like the kinds the faculty are building here at UCLA. But it’s generalizable so theoretically anyone can build a model and use the software to interrogate it, create narratives about it and attach embedded resources to it,” she said.

Students and instructors can also download models from online archives of 3D content (like the 3D Warehouse) and bring the models into VSim either for educational purposes or their own entertainment.

In the long run, Snyder aspires to build a community of scholars and educators who are creating 3D computer models and using the VSim software to explore their models and disseminate their work.

“Ultimately, we hope to encourage people to share the models they’ve built,” said Snyder. “Right now, scholars who build their own models, either for their research or as part of class projects, don’t have an easy way to share that with others.” Thanks to VSim, students and instructors can easily share their 3D models with people around the world.