You are here: Home / Featured / Privacy: A Foreign Member of our Connected World 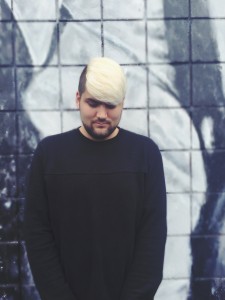 Philip Thomas Rugo Scott (or Thom Rugo, his alias), a 2015 graduate of the UCLA Department of Design and Media Arts, has always been cautious about consuming and sharing information online, unlike other millennials who frequently do so without considering the implications of their actions. His senior thesis project, a thought-provoking art piece titled Central Hub, encourages individuals to reevaluate their blasé attitudes toward privacy, data security and surveillance.

A Reflection of the Modern World

Central Hub, which was on display for several weeks in the UCLA Eli and Edythe Broad Art Center, is a fictional data center that collects and disseminates information. Thom was inspired to begin this project when he was taking an interactivity class taught by IDRE’s very own Lisa Snyder. Central Hub consists of a large black cube with four monitors on each side displaying different images, and dozens of multicolored computer cables protrude from the structure. 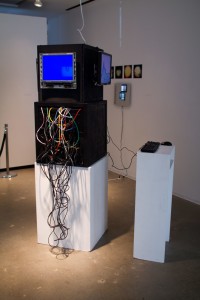 “The cables are intentionally exposed, but it’s very unclear whether or not they are doing anything,” said Thom. People choose to interact with the art piece without understanding whether or not their actions are being recorded, similar to how many people interact with modern technology without comprehending the effect of doing so.

Thom wanted this project to reflect the loneliness that exists in the online world. “We are more connected than ever – data is constantly recorded and stored with every move we make – yet the online space continues to feel more isolating, more singular than ever. Interaction begins to feel more and more meaningless, and I felt a need to express this through Central Hub,” he said.

One of the monitors displays a game designed to make people think more carefully about their browsing activity on the web. On a second monitor on the opposite side of the cube, people can watch the game being played. Thom’s game was recently shown at Northern Spark 2015, an all-night art festival in Minneapolis that brings tens of thousands of people together every summer.

When playing the game, users enter a virtual world that looks like an icy, desolate island with very steep mountains similar to Antarctica. “I wanted the world to look very vast, but I also wanted it to feel very enclosed,” Thom said. “A lot of the inspiration for the game came from cyberpunk novels and early science fiction works that deal with many of the themes we are encountering today.”

As users explore the dystopian world, they will encounter random pieces of data embedded into the landscape. Thom populated the game with publicly available data including Facebook photos and Buzzfeed articles. “The game, more than any other aspect of the sculpture, is very personal especially because the data collected is not global data,” Thom explained.

“Very banal, essentially meaningless content is juxtaposed in this very intense, overwhelming world. I have taken content that we generally consume very passively and put it into this world that requires your attention to be on the content,” he said.

The sculpture also tackles the issues of privacy and surveillance. One of the monitors includes a webcam equipped with facial detection software. On the opposing side of the cube, people can watch those standing in front of the webcam, and they will see a string of text flash across the screen whenever a face is detected.

“I noticed that many people, especially at art shows, are eager to take pictures of themselves with webcams. With this piece, people are looking at themselves in the monitor on one side, but they don’t know that people on the other side of the cube are observing them do that,” he said. “People are unknowingly putting all of this data about themselves out into the world for others to find.” Thom’s piece will definitely make people think twice before doing so.

Opening up a Dialogue

Thom ultimately hopes Central Hub will encourage people to question how they engage with technology and think about the temporality, accessibility and expendability of data. He believes people generally have a passive attitude toward data consumption and collection, and he anticipates that his project will inspire a dialogue about important issues in the digital age like privacy, security and surveillance.

Moving forward, Thom plans to continue pursuing creative endeavors. This summer, he is looking forward to helping create live concert visuals for the Earth, Wind & Fire tour. “I keep myself very open to new types of work and new ideas. The future is always open – I hope to attend graduate school, continue my artistic practice, and teach,” he said.