You are here: Home / Featured / UCLA Professor Unites Film Analysis and Technology for a New Interpretation 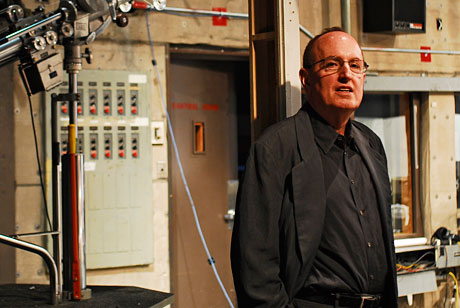 During the 1960s, UCLA cinema and media studies professor Stephen Mamber pioneered an education for himself that did not previously exist. While completing an undergraduate degree in math at UC Berkeley, Mamber fell in love with movies. UC Berkeley had no formal film program and only a handful of film courses so he ended up drifting down to UCLA the summer after his junior year for a deeper look into film. He returned to Berkeley that fall and added drama to his studies and graduated with a double major.

When his interest in film began, he said he thought his interest in his original major would quickly be left by the wayside, but IDRE HASIS Committee member Mamber said the opposite soon proved true.

“When I went into film, I thought math was just going to be left behind and I would be making a complete switch,” Mamber said. “But somewhere along the way the whole desktop computer revolution came along and I started getting really interested in doing stuff with movies on computers and it sort of came in handy that I knew some stuff about math.”

Mamber was the first professor at UCLA to teach a digital media class in 1986 or what was then called a “multimedia” course. Pen, machine, and their intersection has informed much of Mamber’s life work. A founding member of the Los Angeles Film Critics Association, his interest in the technological led him to design a program that collected video clips into a database.

After the arrival of iPads and tablets, Mamber saw an opportunity to combine mobile technology and film analysis in the form of an app he developed called ClipNotes. The app retrieves segments of video and allows them to be shown in combination with notes. Users can also download other people’s ClipNotes presentations. The application comes preloaded with film from the UCLA Film and Television Archive and he said currently the files for around 120 films exist on ClipNotes.

In addition to ClipNotes, Mamber works on independent digital media projects. One such project is “Who Shot Liberty Valance?,” the first on a series of films with complex time structures. He said the film “The Man Who Shot Liberty Valance” has been misunderstood for 50 years without the aid of technological film analysis. It has two versions of the gunfight, and while many critics have argued the second one clearly reveals the killer of Liberty Valance, Mamber’s project shows the two scenes side by side in a way that throws the identity of the killer into doubt and completely changes the long held interpretation of the film in a way traditional film analysis could not.

“I got more response in the first week with the Liberty Valance app than the first year the book I did about documentary film,” he said. “The impact is quick and so wide.”

As a professor, Mamber advocates that media is now at the level of necessary literacy and said programs like Photoshop should be just as important as word processing for scholars and citizens of the 21st century. In line with a career that has combined both education and creation, he believes of production and the tools of analysis are the same tools and students of digital media should not just interpret but also make digital media.