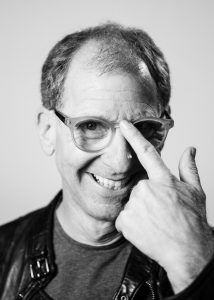 “My college roommate was a philosopher,” so goes the story of Dr. Mark Cohen. Cohen’s isn’t one that involves an early onset of an existential crisis nor is it the typical hellish-roommate tale. On the contrary, engaging in philosophical discussions as an undergraduate helped spark Cohen’s interest in the human brain.

A professor-in-residence at UCLA’s Semel Institute for Neuroscience and Human Behavior and the creator and director of the Semel Neuroimaging Training Program, Cohen has helped forge revolutionary advancements in his field including functional magnetic resonance imaging (fMRI) technology, which he helped pioneer in the early 1990s.

“Imagine the difference between taking a photograph of a house and doing thermal imagery of the house that shows the water flowing through the pipes,” he said. “Given that it takes a lot of energy to use your brain – about a quarter of the energy your body uses – the energy is delivered only to those parts of the brain that are most practical, and energy is delivered in the form of red blood. As it happens, the fMRI is capable of detecting differences in signal based on blood oxygen. So, we can directly place where in the brain more energy is being consumed.”

Cohen has also been on the forefront of computational neuroscience, which his alumni routinely employ while conducting research. Essentially, they utilize machine learning to run faster analyses on the brain by using the Hoffman2 cluster, a supercomputer for use with enormous databases hosted at IDRE.

Dr. Ariana Anderson, Dr. Don Vaughn, and Dr. Wesley Kerr are three of his nearly 30 Ph.D. student alumni and are currently working on research projects at UCLA that rely on fMRI technology.

“In my field, big data is the norm,” said Anderson, who is an assistant professor at UCLA and the director of the Laboratory of Computational Neuropsychology. “Because of Hoffman, we were able to process in parallel and analyze roughly 300 brain imaging scans in a short period of time.”

What would take Anderson a year to complete on her own, takes Hoffman2 only ten days. Comparing it to her desktop is like comparing a golf cart to a Bugatti Veyron. She’s going places much, much faster.

Instead of trying to run the analyses on her own, Anderson selects the databases she wants to use and writes instructions for how she wants to analyze her data.

“You can’t go through every brain image and flag whether or not a scan is bad,” she said. “You’re only one person against lots and lots of data, so you’ve got to figure out smarter ways to work.”

Aside from identifying what type of activity happens in the brain before the onset of depression and schizophrenia, Anderson has used the skills she learned at Cohen’s lab and the resources she has as a UCLA researcher to create an app which allows deaf parents to better connect with their babies. Unlike a traditional baby monitor, her app “Chatter Baby” lets parents know whether their baby is laughing or crying when they’re not in the room to see. If the baby is crying, the app uses the audio data to determine whether it’s due to hunger, pain, or fussiness. Anderson and her team analyzed thousands of waveforms of crying babies to create the algorithms for the app, and she also received help early on from Vaughn, a post-doc studying perception and behavior

Other than the Chatter Baby project, Vaughn also uses fMRIs to analyze activation patterns of empathy in the brain in real time. He contributed to a study where subjects were asked to rate their empathic abilities and identify their core beliefs. The subjects then watched a series of videos of a syringe stabbing a hand, each corresponding with a different belief system.

“Typically, you don’t get anything in the brain for free,” Vaughn said. “Everything comes at a cost to something else.”

Pairing up with Kerr, a recent Ph.D. graduate who worked with Cohen, Vaughn also started working on a project that aims to detect inflammatory bowel disease (IBD). By analyzing millions of subjects through electronic health record databases, Kerr and Vaughn formed statistical predictions on whether a patient may develop IBD, and if so, what kind.

In addition to this project, Kerr also studies the differences among the types of seizures patients suffer from in order to determine whether someone may have epilepsy.

“One of the problems we have is that patients that have non-epileptic seizures are treated as if they have epilepsy for an average of eight years.”

All the while, the patient won’t respond to medication intended to treat epilepsy if the patient, in fact, does not have it. The difficulty is that epileptic and non-epileptic seizures are strikingly similar. So, employing Hoffman2 and the skills he learned under Cohen, Kerr mines databases of patients that come in for monitoring at UCLA, which include videos of patients having seizures and data about the electrical activity going on in their brain while it’s happening.

“I’m trying to identify patients earlier so that we can treat them better earlier on, which I think will save on costs to the system and improve their quality of life quite a lot,” Kerr said.

Kerr is currently completing a medical internship Eisenhower Medical Center near Palm Springs and will return to UCLA next year to complete his residency in neurology.

Anderson, Vaughn, and Kerr echoed similar sentiments about Cohen, saying that he has prepared them to form the right questions to ask and helped foster the skills they need to answer them.

“I have some incredibly talented students who are way smarter than I am, and they have been enormously productive in contributing to the science,” Cohen said. “My job is a combination of inspiring, enabling, and directing.”

In this way, he has prepared the next wave of UCLA neuroscientists and equipped them with the tools they need for research in the era of big data.