You are here: Home / News / Farther Than the Eye Can See

As for the phrase “as far as the eye can see,” it turns out to be actually not that much.

This was proven during the 17th century by Robert Hooke, an English physicist, architect and polymath who used a hand-crafted microscope to detail his accounts of plants, insects, and objects. His microscope was so precise that he was able to see individual biological units, which he termed “cells” as he thought the constituent components of a plant resembled monastic cells, the small rooms used by monks in monasteries. 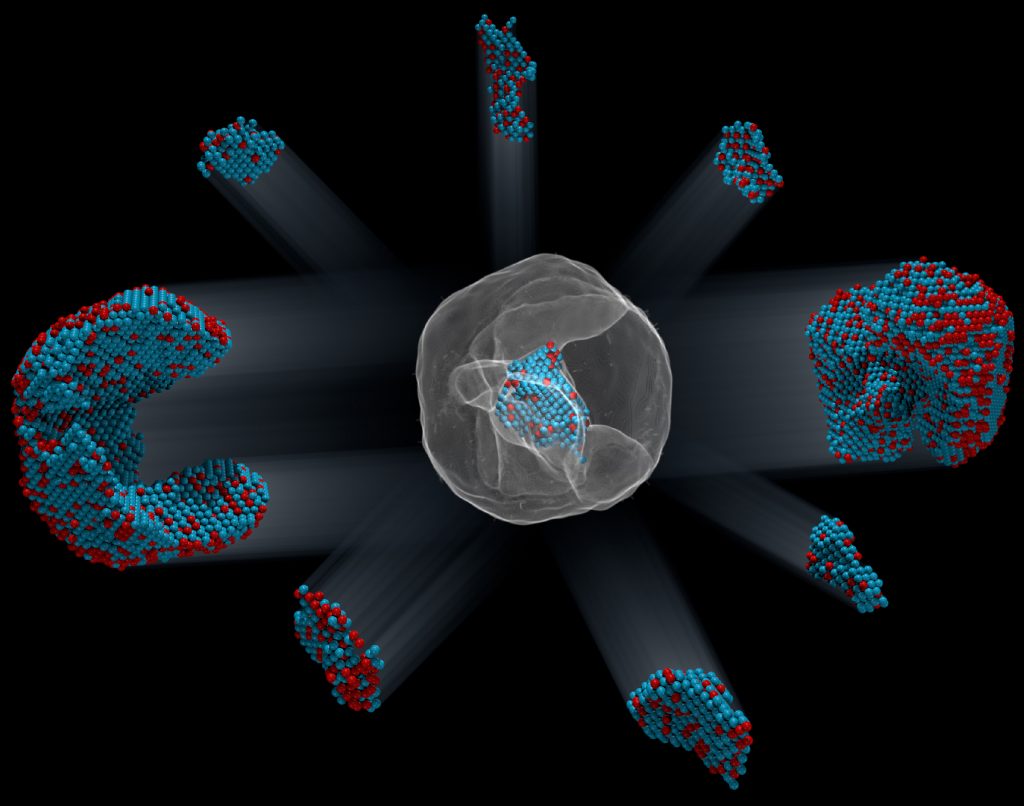 The 3D positions of more than 23,000 atoms in an iron-platinum nanoparticle are determined with 22 picometer precision (iron atoms in red and platinum atoms in blue). The nanoparticle consists of two large and six small grains with different chemical order, allowing scientists to correlate crystal defects such as grain boundaries with magnetic properties at the single-atom level.

The physical lens had been the standard for use in the detailed study of microscopic organisms since Hooke’s seminal work Micrographia was published in 1665. Dr. Jianwei Miao, a professor of Physics and Astronomy and the California NanoSystems Institute at UCLA, blew that standard out of the water with a method known as Coherent Diffractive Imaging (CDI).

CDI, also known as lensless imaging or computational microscopy, is a unique break from the past in that it doesn’t use a physical lens at all.

“For more than 300 years we have had a microscope based on lenses to produce a magnified image,” said Miao, a collaborator with the Institute for Digital Research and Education since the inception of the Hoffman2 Cluster in 2008. “Now we replace the physical lens with computational algorithms,” he said.

By replacing the physical lens, Miao uses a detector to record the signals and then uses a computer to create an image out of the information recorded. It turns out to be more accurate than the physical lens in many applications.

The problem with the physical lens is that it can have aberrations that prevent it from effectively recording a perfect image. For example, someone with nearsightedness may not have the focusing power to see objects from far away with a high resolution. Also, an imperfection of the eye’s curvature, such as in an astigmatism, results in distorted images. These conditions are more extreme, but to some extent all physical lenses have some sort of imperfection. Because a computational lens does not have physical aberrations or other kinds of defects, one can get a very high three-dimensional resolution of an image that traditional lenses cannot. 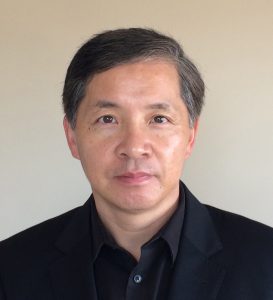 Professor Jianwei Miao changed a standard for the detailed study of microscopic organisms that had been in place since 1665.

“It turns out computational methods can be a perfect lens,” he said.

Professor Miao formed the Coherent Imaging Group in 2004 to continue his cutting edge multidisciplinary imaging research. In addition to CDI, Miao also developed what is known as Atomic Electron Tomography (AET). This allows for the study of defects at the atomic level. The method is capable of three-dimensional structure determination of crystal defects and disordered system at the single-atom level. While other methods like the electron microscope exist that can also see individual atoms in two-dimensions, AET is the only method that does so in three-dimensions.

“I want to do something that nobody else has done before,” Miao said. “The way I look at is simple. If you are on Wall Street and want to get a really big reward, you must take very high risks,” he said. “I wanted to be a pioneer of the imaging field and took very high risks. It is now getting paid off.”

Professor Miao and his colleague Dr. Margaret Murnane, professor of physics at the University of Colorado at Boulder, were recently awarded $24 million as one of four new National Science Foundation’s (NSF) Science and Technology Centers, known as STROBE, which aims to tackle major scientific challenges by advancing and integrating imaging techniques.

“Science is fair,” Miao said. “If you have big ideas, work extremely hard, and are willing to take high risks, you will have a good chance to get a big award.”