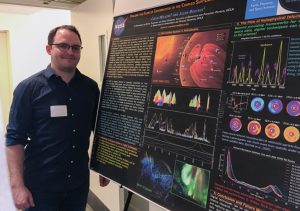 IDRE’s Early Career Research Day recognized Colin Wilkins’ research, Tracing the Flow of Information in the Coupled Sun-Earth Space System, as one of the top four posters presented. More than 80 researchers participated in the poster session event with 40 high-quality research posters on November 20, 2019.

Similar to earth’s weather, space weather has both active and quiet days. The sun’s solar wind, a supersonic stream of charged particles, constantly bombards the earth’s magnetosphere. Most days are quiet, and the magnetosphere shields the earth from the sun’s typical onslaught. However, on an active day, the sun can have violent outbursts– coronal mass ejections– that penetrate the barrier and send energetic charged particles into the planet.

“Understanding how variations in the solar wind control the acceleration and loss of energetic particles within earth’s magnetosphere is one of the main focuses of my research,” Wilkins said.

The research is two-fold: first, developing instruments that measure properties of plasmas and electromagnetic fields near the earth and second, applying big data techniques to analyze the data gathered by the space instruments.

One of Wilkins’ research teams is composed of UCLA undergraduate students who sent the first student-operated satellite in space in September of 2018. The students in the Electron Losses and Fields Investigation (ELFIN) developed and tested a cutting-edge particle detector (EPD) to investigate how energetic electrons lost from the Van Allen Radiation Belts can collide with the atmosphere.

Wilkins takes data from ELFIN and several similar missions and analyzes it using a number of methods which include statistical machine learning techniques such as transfer entropy and neural networks. The Ph.D. student aims to discover how dynamical variables like the sun’s interplanetary magnetic field and the properties of its solar wind such as flow velocity, density, and temperature control important parameters within the magnetosphere, such as the generation of relativistic electrons and ion fluxes near the planet.

“The physics of the coupled sun-earth system is not only interesting from a scientific research perspective, but also in that it can unwittingly have major impacts on our daily lives,” Wilkins said.

With improved predictive capabilities, we will be able to foresee disruptive space weather events similar to the Solar Storm of 1859. A solar coronal mass ejection spurred history’s largest solar storm and induced electrical currents so large that telegraph lines caught fire and began to operate without being plugged in. Humanity was fortunate that the earth of the 1800s did not harbor an extensive amount of susceptible technology.

“That is not the case today,” Wilkins said. “Should such an event occur now without warning, power grids and technology across the entire planet could be damaged.”

Colin Wilkins is a Ph.D. student under UCLA’s Earth, Planetary, and Space Sciences department who has led a team in researching and developing space instrumentation since 2016. He worked under the guidance of his advisor, Professor Vassilis Angelopoulos, Ph.D., and with the support of the UCLA Experimental Space Physics (ESP) group as well as with Professor Jacob Bortnik to investigate novel approaches of applying machine learning techniques to space science research.

Wilkins’ research is funded by the Future Investigators in NASA Earth and Space Science and Technology (FINESST) award.