You are here: Home / News / Leave Nothing to the Imagination: The Mathematics of Visual Effects 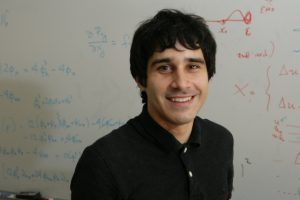 In show business, it’s all about who you know. But for UCLA Mathematics Professor and IDRE-related faculty Joseph Teran, it’s all about snow. His research into the mechanics of ice crystals that fall from the atmosphere aided the Walt Disney Company in the creation of animated snow sequences in its Oscar-winning film “Frozen.”

Teran has consulted on Disney animated projects, including “Frozen” and “Moana,” since 2007. His very first endeavor was creating a “destruction engine” for the film “Bolt,” which centers on a famous canine who thinks the powers he has on his television show are real.

“Whenever things break apart in the film—for example, in one scene a hamster ball breaks apart—I worked on it to make it look as realistic as possible,” he said.

When most people think of entertainment they think of unfettered creativity. But Teran’s job is to ground the animation with a level of mathematic and physical knowledge that allows the materials – such as snow and water – to appear to function as they would in real life. This reality makes the audience’s escape into the complex story worlds conjured by his clients that much easier.

The process is highly complex. For example, to aid the animators in rendering the snow sequences in “Frozen,” he used a method known as particle-in-cell (PIC), which refers to a technique used to solve differential equations.

Solving such equations aids in perfecting the physical movement of materials, such as angular momentum and energy. The specificity of how a boat might behave on a wave, as he helped to figure out for “Moana,” is why his work is so highly regarded.

Although PIC is most commonly used for water animation, Teran and his team were able to generalize it to a wider range of materials like snow. Built over three-to-four months, he turned over a constitutive model, or a relation between two physical quantities that is specific to a material or substance and approximates the response of that material to external stimuli, to the animators.

Outside of his work for entertainment companies, Teran’s research has also yielded important medical applications. His research includes development of surgery simulation. He said one can think of this kind of simulation as a highly realistic game complete with physically accurate biological organs. Logically, medical students were early adopters of the program.

“For Disney, the simulations have to run fast enough so that they can be controlled by the artists,” he said. “But with the simulated surgery you can interact with it in real time so it feels more like a video game than a movie.”

As his research in mathematical areas such as computational solid and fluid mechanics and parallel computing continues, so too does his work in the world of entertainment.

Although he could not reveal his current projects, Teran did reveal recent visual breakthroughs improving animation as it relates to clothing dynamics as well as the material of sand.

“Since we are in Los Angeles, I thought we better know how to simulate sand,” he said.