You are here: Home / News / What’s to Come: The Science of Epigenetics 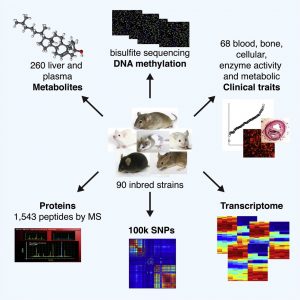 An overview of the Pellegrini Lab’s studies in mice. Depicted at the top is DNA methylation data used to relate to metabolic traits.

Each June, thousands of UCLA students graduate and find themselves thrust out of the familiar university environment. Some have secured full-time jobs, others acceptance to graduate schools, and for many the path ahead is simply unknown. In the world of genetics, though, much of what’s ahead can be scientifically-speculated directly out of the womb. And what’s possible is rapidly expanding through the study of the genome, which is the complete set of genetic material present in a cell or organism.

Today, to get one’s genome sequenced and analyzed costs about $1,000. In 2008, that cost was around $10 million. Mail order tests are now available to predict the genetic risk of diseases including breast and ovarian cancers to bipolar disorder to Parkinson’s disease whereas 152 years ago the gene had not even been discovered. Although Dr. Matteo Pellegrini, a professor in UCLA’s Department of Molecular, Cell, and Developmental Biology, and member of the Institute of Digital Research and Education’s Executive Committee, is astounded by the incredible leaps and bounds of genetic technology, his lab hopes to further develop predictive technology based on what is known as epigenetics.

The idea of epigenetics is that all the cells in your body have the same genome, but very different forms. If you look at a brain cell, or skin cell, or blood cell, they’re all genetically identical, but perform different functions. Trying to understand the biology that determines the actual state of the cell and ultimately the state of the organism is at the heart of epigenetics.

“Once you can describe in greater and greater detail the system you’re studying, you can then apply it to develop tools that are practical applications and can be applied to human clinical care and health,” Pellegrini said. “Simple tests can tell you something about your health, your risk of disease, and your actual disease status.”

Genetic tests have the ability to detect predisposition to certain diseases, and in some cases that predisposition is extremely high if you have a specific genetic makeup. Think breast cancer or cystic fibrosis. Yet Pellegrini said understanding your risk for other diseases, such as diabetes or Alzheimer’s that tend to occur later in life and don’t have a strong genetic component but do have a strong environmental component, require tools other than genetics.

“That’s where epigenetics comes in, to try to understand how the environment affects the system and how you can then diagnose the disease, determine disease risk, and hopefully develop techniques for alleviating and reducing the disease,” he said.

One particular epigenetic mechanism the scientists in the Matteo Pellegrini Lab study is DNA methylation. The addition of a methyl group, or one carbon atom bonded to three hydrogen atoms, to DNA often alters the function of the cell. By studying DNA methylation, Pellegrini said it not only allows researchers to understand how different cell types develop, but also how the environment affects the cells. Ultimately these modifications are used to understand other issues like the risk of getting certain diseases or diagnosing these diseases directly.

While what next year holds still remains a mystery to many, just how far genetic and epigenetic research will advance is another question although it is certain that such research will continue to advance further than it is today. And with the use of IDRE’s Hoffman2 Cluster to do the computations necessary for its research, Pellegrini’s lab will continue to forge ahead with it.