You are here: Home / Featured / UCLA Professor Pushes the Envelope of Particle Physics 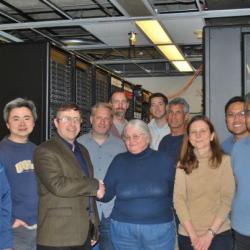 Zvi Bern, a professor in the physics department, is pioneering new techniques to analyze particle processes. Featured in national publications such as Scientific American, Bern’s ideas are turning the physics world on its head.

For the past 60 years, scientists have used Feynman diagrams to understand the scattering behavior of subatomic particles when they collide with one another. While Feynman diagrams are useful for comprehending basic processes, they are an inefficient and outdated system to work out more complex problems.  Thanks to Bern and his colleagues, who developed an innovative technique known as the Modern Unitarity Method, physicists can now decipher more challenging problems previously thought to be unsolvable when only Feynman diagrams were available.

Not only does the unitarity approach allow particle physicists to analyze complex problems, the new method has also reinvigorated the age-old effort to unify Einstein’s general relativity theory and quantum theory into a quantum gravity theory. With this new method, Bern is challenging over three decades of established dogma and forging paths for future research in his fields of study.

A nice way that people can learn about Bern’s work is from a TEDx talk he was asked to give at Caltech in 2011 to discuss his groundbreaking research. The opportunity gave him a platform to introduce his revolutionary findings to those outside of the particle physics community. Bern described the experience as intense. “The basic problem [was] figuring out how to explain something that is pretty complicated and technical. I had to take something that takes many years of graduate school training to understand and squeeze it into ten minutes,” said Bern.

Bern spent an entire week trying to work out how to condense years of research into a mini-presentation that was both understandable to non-scientists and interesting. His efforts certainly paid off. Bern successfully delivered a TEDx talk summarizing his findings to an audience of over 1000 people. Now via YouTube, his innovative methods and ideas have reached over 25,000 people, and the number of views is continuing to grow.

As a concluding remark in his TEDx talk, Bern reminded audiences that “a great idea can always kick the pants off of a supercomputer.” Bern still stands by this idea, but he does acknowledge that computers play a huge role in his scientific research. “Ideas are always better, but computers are leverage. With computers you can take an idea and magnify it. You can explore and test an idea in ways that are not possible without a computer.”

Bern says that his research would be extremely difficult to complete without IDRE’s Hoffman2 Shared Research Cluster, UCLA’s very own supercomputer. Although the Hoffman2 Cluster is significantly smaller in scale compared to the National Center for Supercomputing Applications, Bern prefers the more intimate, personalized setup at UCLA.   “The national supercomputer centers have way more CPUs than we have here, but I greatly prefer working on the Hoffman2 computer. The reason is that here, at UCLA, I have more control. By control I mean that if there is a problem with the queuing system, or some other issue, I send them an email, and it’s like magic: The problem is solved. If I was at the National Supercomputer Center, I could send them all the emails I want, but there is no way I would get this level of service,” said Bern. He praises the team responsible for managing Hoffman. “Bill Labate and his team are extremely good.  Whenever we have problem, we always feel that they are here to help us.”

The Hoffman2 Cluster also allows Bern to run jobs more efficiently. “At UCLA, I am guaranteed that jobs will run within 24 hours on the computers that I contributed to the Hoffman2 cluster.  At a national supercomputer center, I have to wait in a queue, sometimes for a week.  In addition, I don’t know how long it will take before I get an answer. I can get a better throughput here,” said Bern. Constantly having to wait in a queue is extremely unproductive because scientists often need quick feedback. “The setup we have at UCLA is absolutely essential. We have control over the hardware and software. We have control over the queuing systems. If there is any kind of problem, we can get immediate help. It’s the way scientific computing should be.” As Bern enthusiastically noted, “I collaborate with people all over the world, and they all use our computer because our setup is by far the best.”

Currently Bern is engaged in several research projects. Using the Hoffman2 Cluster, he does calculations for the Large Hadron Collider, the most powerful particle collider on the planet. To do these calculations, he utilizes a numerical integration technique known as Monte Carlo integration.

Bern is also doing investigations into gravity. Many scientific experts believe Einstein’s general relativity theory to be incompatible with quantum mechanics. They argue that any attempt to construct a quantum theory of Einstein’s gravity will confront mathematical inconsistencies and will be completely unintelligible. Bern seeks to prove the experts wrong. “What we have to do is demonstrate that the inconsistencies people are worried about are not there, but the calculations we have to do to prove this are very complex even with all our new ideas,” said Bern.

Bern relies on a methodology that involves good ideas, computers and a whole lot of guesswork. “Once we have the basic idea, we guess how it works. Then we use the computer to show that our guesses are correct … The more accurately you can guess, the less the computer has to do,” said Bern.  “We believe that there are not untamed infinities. We aim to prove it by guessing what the correct answer looks like, and we use the computer to confirm the answer.” Guessing the correct solution is a very daunting task, but if Bern can successfully come up with the right answer he will change the face of physics.

Bern’s cutting-edge research has not gone unnoticed. In April, together with two of his collaborators, he will be awarded the American Physical Society’s 2014 J.J. Sakurai Prize for Theoretical Particle Physics, which recognizes exceptional achievement in particle theory. He is receiving the award for “pathbreaking contributions to the calculation of perturbative scattering amplitudes, which led to a deeper understanding of quantum field theory and to powerful new tools for computing QCD processes.” Bern feels deeply honored to win the award. “There’s a wonderful collection of physicists who have received the award in the past. It’s a great honor to be in their company.”

When asked to give advice to young researchers, Bern had a lot to say. “You have to believe your elders, but not too much. The most important work in science goes against the past. Science is all about revolution. You want to show that the past understanding was not exactly right. You have to find some angle that other people are not looking at. The downside of this is that, if you’re going down an unconventional path, that path can be a rough one until people recognize that you have done something new and important.   It can also turn out the path you choose is misguided, given that your scientific elders generally know what they are talking about. But if you can really prove that you have done something new and important that goes against the standard wisdom, people will then be very enthusiastic. You might even win a Sakurai prize.”

To learn more about Bern’s research, see the cover story of the May 2012 issue of Scientific American and the TEDx video.