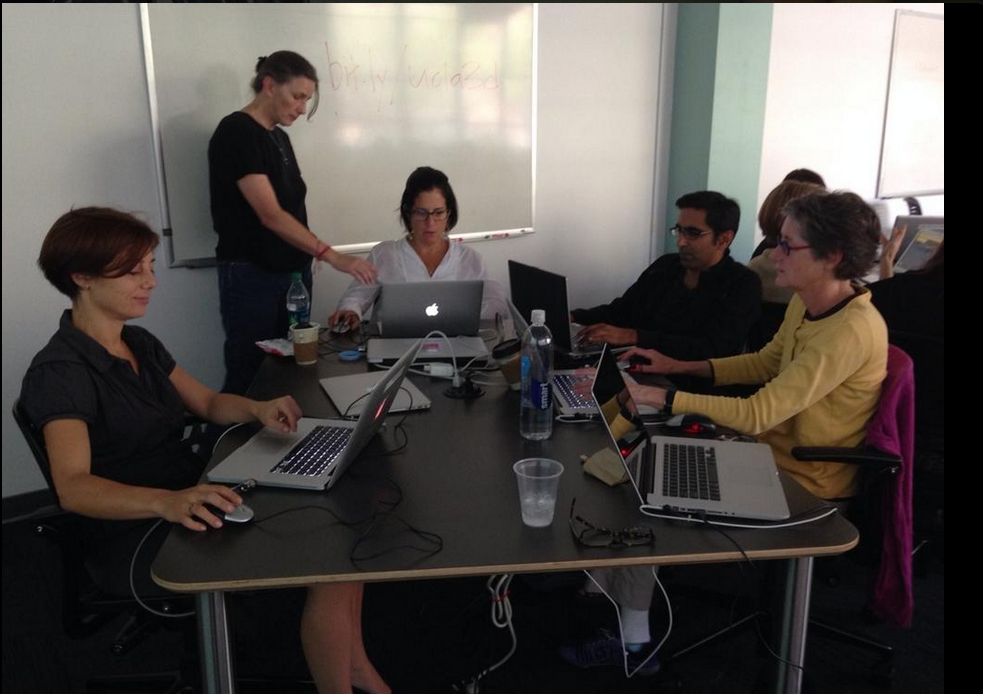 Lisa Snyder helps participants at the Beyond the Digitized Slide Library summer institute.

The widespread use of digital technology in research, publication and teaching has had a transformative effect on many academic disciplines, including art history. Through the Digital Art History initiative, the Getty Foundation has enabled art historians across the country to explore the opportunities and challenges created by new technologies.  The Foundation awarded four grants, which supported training workshops to prepare art historians to use digital tools to analyze their sources and plan innovative projects.

One of the four grants was awarded to the UCLA Digital Humanities program in 2014 for an eight-day summer institute, Beyond the Digitized Slide Library. The success of the first institute inspired another one in 2015, which took place on the UCLA campus from July 5-15. Participants were given the opportunity to learn about critical concepts in the digital humanities and gain hands-on experience with tools and techniques for art historical research, such as data visualization, network graphs and digital mapping.

Thanks to the generosity and support of the Getty Foundation, there were no fees associated with the program, and participants received travel and lodging in Los Angeles for the entire duration of the institute.

Institute coordinator Francesca Fabrezzi, a Ph.D. candidate in UCLA’s World Arts and Cultures department, explained that the main difference between this year’s institute and last year’s was that this one focused much more on workshopping the projects. By breaking into smaller groups and working from the trenches, the participants developed a greater sense of comradery, which benefited both themselves and the faculty members.

Faculty members Johanna Drucker, Todd Presner, and Miriam Posner spoke at the institute along with UCLA’s team of leading digital humanities technologists. IDRE’s own Lisa Snyder, a modeling and visualization expert, and Albert Kochaphum, an assistant GIS coordinator, also contributed to the success of this event, each teaching sessions on modeling and mapping respectively.

“The institute was a great way to understand how librarians and other researchers are applying technology to their research,” said Kochaphum. “It was great to reach out to this community that we don’t really interact too much with, me being an urban planner who works mainly with web maps.”

Over the course of the first week, participants explored the art galleries at the Getty Center and learned about a wide variety of topics, including data structures, web publishing, digital publishing, information visualization and digital mapping.  They were also introduced to Infoviz, a visualization library, and the Artstor Digital Library, an online resource of 1.8 million images in the arts, architecture, humanities, and science. Participants used both of these resources to complete their group projects.

During the second week, the groups finished up working on their final projects and prepped for the colloquium, which took place on Tuesday, July 14 in the UCLA’s Young Research Library. The colloquium was divided into four sections: A) Future of Art Historical Publication, B) Working with Technologists, C) Digital Art History Funding and D) Museums and the Digital Future. This special event was followed by a dinner for the participants, faculty, and VIPs.

On the final day, the Institute faculty wrapped up the successful program and discussed next steps in terms of project management.

Drucker said that this event was a win for all involved. “We had fifteen art historians at relatively early stages of their careers, all interested in the use of digital methods for critical engagement with their research. Some had an acquaintance with digital techniques, but most had a professional area in which they wished to expand their knowledge.” Whether they were interested in looking at social networks of production in manuscript culture in Moghul India, the spread of Eastern European architectural design into the African sub-continent, or exhibition design and creating online research materials for a university environment, all participants learned something valuable.

“In the end, I think everyone walked away with a greater arsenal of digital tools, but more importantly, with a greater understanding of how best to incorporate them within their various projects, amidst different collaborations and networks, and within their institutional settings,” said Albrezzi. “These art historians now have the digital tools, techniques, and resources to tackle core questions in the field and teach new methods in the classroom.”

“Hopefully some of these modules can be developed here at UCLA with the talented staff and faculty in Digital Humanities. We learned as much from our participants as they learned from us,” added Drucker.