You are here: Home / Featured / Visualizing the Cost of Incarceration in L.A.

A Collaboration Between IDRE, UCLA Faculty, and Community-Based Organizations 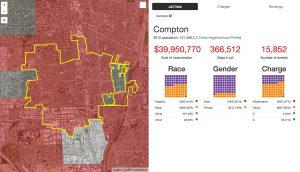 Policing and mass incarceration are two issues that have sent currents of activism, debate, and calls for change from the American public. Perhaps a lesser known fact is that the heart of mass incarceration in the United States lies in Los Angeles County, which runs the largest jail system in the country.

Million Dollar Hoods, a visualization project that shows the financial and social impacts of incarceration on L.A. communities, was created through the efforts of UCLA Associate Professor of History and African-American Studies Kelly Lytle Hernandez, IDRE GIS technologists Yoh Kawano and Albert Kochaphum, and UCLA Institute for Research on Labor and Employment fellow Robert Habans.

Though Los Angeles County holds some of the wealthiest neighborhoods per capita in the U.S., “Million Dollar Hoods” flips this concept and instead maps out areas that receive the most amount of taxpayer dollars — to maintain and expand their prison systems.

This interactive online map allows visitors to view the total cost of incarceration per neighborhood, and includes specific data on each arrest including the race, gender, and category of crime committed. The current data reveals that L.A.’s billion-dollar jail budget is largely spent on a few regions, with the cities of Lancaster, Palmdale, and Compton ranking highest in total cost of incarceration, number of arrests, and the aggregated number of days spent in jail. 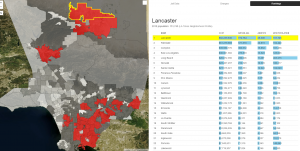 Hernandez, who is a leading scholar on the history of race, policing, immigration and incarceration in the U.S., noted that this project is not the first of its kind – but what “Million Dollar Hoods” does present is the first visualization of L.A. County’s disproportionate spending on incarceration, particularly in low-income communities with the demographics most heavily impacted by mass incarceration.

“This kind of thinking runs against the grain of police department mapping, which shows where crime happens,” Hernandez said. “We show communities most impacted by incarceration, which comes from people who have been incarcerated and people fighting incarceration.”

“It’s hard to get access to data,” Hernandez said. “In August of 2015, I began requesting data from the L.A. Sheriff’s Department and LAPD, thanks to the California Public Records Act. They’re required to provide information, but they repeatedly denied our requests and gave different reasons. But we won, we got the data.”

By January 2016, LASD began to send Hernandez daily “data dumps” of booking records. A few months later, Hernandez managed to obtain all booking records from January 2010 through December 2016, giving the research team a six-year picture of incarceration in Los Angeles.

“Looking at the data was shocking,” Kawano said. “It wasn’t in a spreadsheet format, it was in HTML. It was literally a data dump of their internal web framework. It was not in a usable format, and we had to extract the data and convert it.”

Once the data was converted to a usable format, the team developed geocoders, which change postal addresses into geographic locations with numerical coordinates on a map.

Kochaphum and CSUN GIS student intern Jamil Cineus also worked extensively on cleaning up the data, as the lack of standards in LASD’s data entry led to frequent misspellings and other errors.

“The data set had an incredible number of typos,” Kochaphum said. “Cleaning up addresses was a huge part of the work, especially correcting different spellings of ‘Los Angeles.’ There was no standard for data entry and intake.”

Habans identified data trends and devised the daily bed rate formulas, which calculates the cost of maintaining “one bed,” or prison inmate, per day. As Hernandez explained: “Neither LAPD nor LASD calculate the daily bed maintenance rate, so we had to develop our own formulas with that cost. The L.A. County Auditor provides a daily amount, what has to be paid to LAC to hold a person there. We took the reimbursement rates and averaged them over the years and adjusted for 2016 dollars.”

This collaboration between IDRE researchers and UCLA faculty brings together their mapping and visualization expertise with Hernandez’s historical and cultural knowledge.

“I think it serves as a great example of how the partnership between researchers in IDRE and passionate faculty is a great partnership,” Kawano said. “We provide a certain lens toward data and perspective on the use of technology. We love visualizing data. And when you mix that together with a historian like Kelly, I thought it just was a great fit.”

Beyond working with numbers and data, the research team also partnered with local organizations who would most benefit from this open data, such as the County of Los Angeles Human Relations Commission.

The Commission recently started a series of public hearings on policing in Los Angeles, and the testimonies from local residents are filmed and made available to the public. A select group of the stories are also posted on the “Million Dollar Hoods” website.

“We’ll share it on our site, some of the stories that speak closest to the the trends in our data,” said Hernandez. “They bring a human face to the many costs of incarceration. I don’t want this project to go down as just about dollars and cents . . . it’s about the human lives and how much we’re losing by investing in incarceration rather than investing in mental health services, in addiction services, in families and education.”

Although “Million Dollar Hoods” is focused on incarceration in L.A., the research team hopes that its impact will extend beyond the borders of the city.

“It’s really about social equity and justice, whether it’s environmental or social.” Kochaphum said. “It’s a good example for other cities as a model to approach incarceration data. At the end of the day, I think what Kelly has done in terms of getting data from the police department, I think other people can follow that model of taking initiative and [find] someone to pair that data with the technical know-how.”