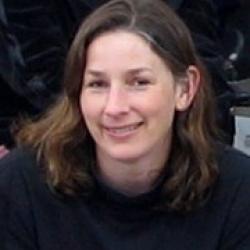 Manager of Visualization and Modeling

Lisa is OIT’s Director of Campus Research Initiatives, Acting Director of the Research Technology Group (RTG), and Manger of GIS, Visualization, and Modeling Group within the RTG. Through these roles, Lisa is responsible for providing institutional leadership and support to coordinate and build campus capacity for innovative research and pedagogy through institutional coordination, alignment, and development of IT system requirements related to research computing and research data management. She also works to facilitate broad-based, campus-wide collaboration and coordination with all academic departments, administrative and academic support units, campus computing facilities, and media/communications offices to align research and research computing with institutional direction.

Lisa has a Master of Architectural History from the University of Virginia and a Ph.D. in Architecture from UCLA. Her primary research is on pedagogical applications for interactive computer models of historic urban environments. She developed the reconstruction model of the Herodian Temple Mount installed in 2001 at the Davidson Center in Jerusalem, and expanded the project in 2007 with a reconstruction of the early Islamic structures on the site during the eighth century. Lisa has also worked extensively on a reconstruction model of the 1893 World’s Columbian Exposition that is shown intermittently at Chicago’s Museum of Science and Industry.

Currently, with funding from the National Endowment for the Humanities, Lisa is leading a team to develop VSim, a software interface that provides users with the ability to craft narratives in three-dimensional space as well as the ability to embed annotations and links to primary and secondary resources and web content from within the modeled environments (HD-50958-10 and HK-50164-14). In 2017, Lisa and Elaine Sullivan (UCSC) published “Digital Karnak: An Experiment in Publication and Peer Review of Interactive, Three-Dimensional Content,” in the Journal of the Society of Architectural Historians, which used a 3-D reconstruction of the ancient Egyptian temple complex as the basis for a publication prototype that uses VSim to embed academic argument and annotations within the 3-D reconstruction.

Snyder was also co-PI on “Advanced Challenges in Theory and Practice in 3D Modeling of Cultural Heritage Sites,” an NEH Summer Institute that was hosted at UMass Amherst in June 2015 with a follow-up symposium at UCLA in June 2016 (HT-50091-14). She is an Associate Editor of Digital Studies / Le Champ Numérique and was a senior member of the Urban Simulation Team at UCLA from 1996 to 2013.