You are here: Home / Featured / Bridging the Gap Between Art and Code 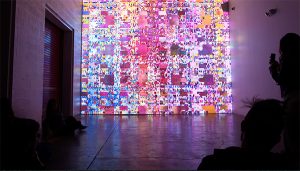 Visual artist Casey Reas’ initial interest in computer programming grew out of an art project. Reas, a UCLA Design Media Arts professor, said that as an artist he has always been engaged in drawing, but found it difficult to represent his subjects through traditional artistic methods. To work around this, he learned to write software that drew thousands of lines simultaneously.

Despite his many artistic endeavors that integrate software and various technologies, Reas, who also serves on UCLA’s Institute for Digital Research and Education’s (IDRE) Humanities, Arts, Architecture, Social and Information Sciences Collaborative (HASIS), said that for him thinking of computers as a source of entertainment and artistic expression is a more recent development.

As computers were used initially as research machines in the sciences and then later as business machines, it was only when the web became a phenomenon in the 1990s that Reas took his professional design work and started to apply it to software.

“I don’t think about writing code and programming as a ‘tech’ thing,” Reas said. “I think about it as a ‘thinking’ thing. It’s a very interesting and powerful way of thinking that doesn’t have a specific domain,” Reas said.

After earning his bachelor’s degree from the School of Design, Architecture, Art, and Planning at the University of Cincinnati, he went on to receive his masters at the Massachusetts Institute of Technology where he also worked as a part of the MIT Media Lab’s Aesthetics + Computation group, a research group led by Professor John Maeda. An internationally acclaimed artist, Reas’ work has been exhibited around the world including at the San Francisco Museum of Modern Art and the Art Institute of Chicago, and he has received commissions from the Whitney Museum and the New World Symphony.

They released a handbook for the language and its second edition was published by MIT Press in December 2014 after more than a decade in use and further development at universities including UCLA, Carnegie Mellon, New York University, and Harvard University.

“It’s a way of bringing people working with technology into the arts and a way to bring people who are working in the arts into technology,” he said. “It’s a space where both ways of thinking can feel comfortable.”

Reas’ approach to teaching programming and software also differs from a more typical computer science curriculum. Although he does give traditional lectures, much of the learning comes during studio time where students develop their digital arts projects. Rather than grading students on how well they understand the material of the code itself and whether or not they can solve problem sets, he said his teaching philosophy centers much more on the media itself and experience that it creates.

“We look at the code in order to realize these experiences, but it’s not what the classes are primarily about.” Reas said. “In my classes the code is a means to an end.”