You are here: Home / Featured / Exploring the intersection of the written word and technology 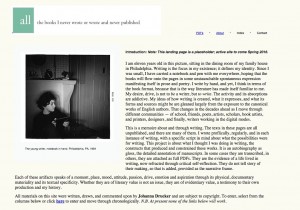 Johanna Drucker is busy. Outside of her work as a professor in the UCLA Department of Information Studies and serving on the University’s Institute for Digital Research and Education’s (IDRE) Humanities, Arts, Architecture, Social and Information Sciences Collaborative (HASIS), she is involved in creating an online project documenting the history of the book and constructing a database memoir, both among her other academic and creative undertakings.

Although Drucker described herself as someone who is not always at the cutting edge of technology (she’s had her smart phone for less than a year), that has not stopped her from becoming deeply involved in the increasingly popular area of digital humanities. She described the digital humanities scene in the 1990s at the University of Virginia as centered around a collection of projects made by humanists who had little background in computer science and library and information studies. Having previously taught contemporary art history, her work around digital art and electronic writing helped her receive an invitation to become a faculty member at Virginia in 1999, where she received a National Endowment for the Humanities (NEH) grant to develop a curricular plan for digital humanities classes.

“I got into it because it was intellectually exciting and art history wasn’t,” Drucker said. “I love art, I make art. But art history, like a lot of academic fields, felt very inward looking. It was all one conversation about certain issues and theories, and digital humanities, like information studies, seemed oriented toward trying to solve some problems in the world.”

While at the University of Virginia, Drucker began Artists’ Books Online, which presents a collection of artists’ books in digital format along with metadata, or descriptive information to go along with them. However, when she came to UCLA in 2008 she felt personally the project was too narrow in scope.

“I know a lot about artist’s books and I wasn’t learning that much because I already know what I know,” she said. “I wanted a project that would be useful pedagogically in a long sense and in an inexhaustible way.”

Thus grew the History of the Book Online. The project functions as an online coursebook, a kind of academic Wikipedia for the history of the book. In line with her belief that active pedagogy is better than passive pedagogy, Drucker has her students fill out what amounts to around a 5-8 page research paper using the special collections at UCLA to construct an entry for the coursebook in HTML, a markup language for creating web documents.

“Data as a concept is so prevalent in the culture, it’s part of literacy to be able to unpack what that means, and how it’s made, and how it’s structured,” she said. “I don’t need to know the technical details of my fridge but I do need to know what to plug and unplug so I don’t get electrocuted. The metaphor is we are kind of getting electrocuted by our lack of knowledge about data.”

When she isn’t teaching the next set of technologically attuned humanists, Drucker has plenty else going on in her life. She is currently researching alphabet historiography and working on ALL, a database memoire that combines her old unpublished writing, some like her first attempt at writing a novel date back to the 60s, with commentary about what she thought she was doing and what did she think writing was at a given point in the past.