As featured in UCLA Newsroom. 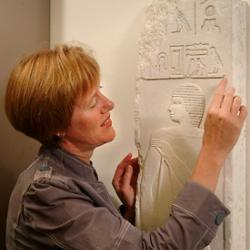 Willeke Wendrich first developed an interest in ancient Egyptian archaeology as a 20-year-old undergraduate student. Now an esteemed faculty member in UCLA’s Department of Near Eastern Languages & Cultures, she has made a career out of her lifelong passion. Currently, she is spearheading several digital humanities projects centered in Egypt, teaching a number of courses and seminars, directing large-scale archaeological excavations, and lending her expertise to numerous committees and executive boards. Wendrich attributes much of her success at UCLA to the support and expertise of IDRE’s consultants and technologists, who have been instrumental in helping her achieve her research goals.

Wendrich hails from a small island in the north of the Netherlands, but her research has taken her to places far and wide. After receiving an M.A. in the History of Religion from the University of Amsterdam, she worked as an assistant professor for Leiden University in Cairo, Egypt and eventually earned her Ph.D. in ancient Egyptian archaeology. Upon completing the program, she came to UCLA, where she dove headfirst into a multitude of digital humanities projects.

As a doctoral student, Wendrich developed a fascination with hypermedia and its use in research.  As a doctoral student, she spent countless hours integrating a one-hour video into her dissertation on the social context of basketry in ancient Egypt. “There is a large appendix in which I outline which minutes of the video relate to what parts of the text and the other way around, which was a huge amount of work. It shows that, at that point, I was already very interested in hypermedia,” Wendrich recalled.

From early on, Wendrich was also interested in designing and programming her own databases to organize dense archaeological data. In 1993, Wendrich began co-directing a large archaeological excavation in a remote area of southern Egypt and singlehandedly created a multi-functional database.  “I developed a quite complex database system that could do both the archaeological context information as well as information about finds,” Wendrich explained. “I worked a lot with databases at that time.”

In 2000, Wendrich accepted an assistant professor position at UCLA and quickly realized that she needed to acquire sufficient funding to attract well-qualified students to future research projects. “It’s really important, if you want good graduate students, that you have the means to support them. Financial support is always limited. So I thought, ‘I need to create a big project for which I get a big grant that has a lot of jobs for graduate students,’” Wendrich noted.

One day, while scanning through the pages of the Lexikon der Ägyptologie (LÄ), an idea for such a project popped into her head. Realizing the need for an online encyclopedia for archaeologists, Wendrich applied to a grant funded by the National Endowment for the Humanities (NEH) for a project called the UCLA Encyclopedia of Egyptology (abbreviated UEE).  For over three decades, the LÄ has served as the primary reference work in Egyptology. However, it is mostly written in German and French, presenting a formidable challenge to English-speakers worldwide. Furthermore, the LÄ is not available in an online format, making it less accessible. The UEE, Wendrich argued, would solve all of these problems.

After being turned down the first time around, Wendrich successfully won a grant from the NEH on her second try. She accredits her success to the support of UCLA’s knowledgeable staff members, who held her hand through the entire grant proposal process. “At the time [I applied], there was someone dedicated to helping north campus faculty get grants. She really helped me negotiate what was needed and how the proposal should be formulated. She also got people together who knew about different aspects that we should put into the grant,” said Wendrich. “I talked to her and explained my idea, and then we had a great meeting with people from IDRE as well as the Library and the Center for Digital Humanities. We all brainstormed how we could make this happen, and when the grant came in [OIT web developer] Chris Patterson really took the project on and did an amazing job developing the functionality for the encyclopedia,” Wendrich explained.

Wendrich eventually received a second consecutive grant to further develop the UEE, which is now available online completely free of charge. The UEE enables users to: rapidly search through thousands of texts and images, give immediate feedback about their experience on the site and find links to other web-based Egyptological content. “The encyclopedia is written by the top Egyptologists worldwide. It’s slowly growing because we are in the process of developing an online presentation system and also creating content,” said Wendrich.

The UEE inspired the development of yet another innovative digital research platform known as Ancient Egyptian Architecture Online (AEGARON), which gives people access to expertly reviewed architectural plans of ancient Egyptian buildings.  At a conference in Germany, Wendrich was approached by Ulrike Fauerbach, an Egyptologist and Building Archaeologist, who was familiar with UEE. Fauerbach pointed out that there were notable differences in many plans representing the same ancient Egyptian buildings, yet she was unsure why the plans possessed those dissimilarities or how the dissimilarities came about.

Wendrich and Feuerbach’s discussion ultimately resulted in the creation of AEGARON.  “There are a lot of mistakes that are repeated because people take a plan, don’t really look at what it is, and reproduce it in another book. There is a lot of uncertainty about what a plan represents. It is the actual state of the building when it was drawn or does it represent the reconstruction of the building? Does it represent different phases of the building?” Wendrich noted. “AEGARON makes all these things very explicit. It compares all of the different available plans and figures out which plans, or what aspects of certain plans, are the most accurate.”

Wendrich is also immersed in The Digital Karnak project. For those unfamiliar with ancient Egypt, Karnak is home to one of world’s most expansive temple complexes.  Wendrich has developed a comprehensive website that allows users to virtually experience Karnak and learn about its prolific political, religious and architectural history.  Wendrich was first inspired to create the website to use as a teaching platform. She wanted a way to show her students how the vast temple complex had subtly transformed over the 2000 years of its construction, reflecting changes in the region’s leadership.

“The whole development of the complex was linked to Egypt’s political development. Every king wanted to get the support of a very powerful priesthood of the god Amun of the Karnak Temple. To do that and legitimize their rule, the kings would add endowments and buildings to the temple … And sometimes they would take down things that the predecessor had built, reusing some of the old blocks as fill for something they wanted to build,” Wendrich explained.

When students visit the Digital Karnak website, they can use the time slider to see how the temple complex has changed over time and learn about what features were added and destroyed in each pharaoh’s period of rule. For a truly 3D experience, users can load the Karnak Virtual Reality model onto Google Earth.

In addition to serving as the PI for UEE, AEGARON and Digital Karnak, projects all based in IDRE’s Technology Sandbox, Wendrich dedicates her time to the Cotsen Institute of Archaeology Press. Cotsen is a research organization focused on generating, spreading and preserving archaeological knowledge and heritage. “I’m the chair of the editorial board, but my agenda is really to focus on the online publication of data. Again, this is based on the database work that I’ve been doing since I first started out. Many projects are focused on data ingest, so we want to make sure that this extremely important data is being preserved,” she explained.

Wendrich also serves as on the executive committee for IDRE HASIS (Humanities, Arts, Architecture, Social and Information Collaborative), which “aims to align deep computational interests of south campus scientists with the cultural and social interests of north campus.” Wendrich noted, “IDRE HASIS was sort of a follow-up to the group that met to discuss UEE. For the longest time, we just kept coming together, and we would draw in people who were interested in similar things. We would call it the ‘yet to be named group’ because we didn’t know what it was exactly.” Eventually, the group was placed under IDRE, where it has become a highly productive catalyst of several interdisciplinary research projects.

“[HASIS] is a platform where people can discuss projects and come up with ideas for infrastructure that is needed … IDRE is really the collaborative umbrella that pulls together a number of centers of excellence that exist on campus, such as the Center for Digital Humanities. It really enables this exchange of information and further interdisciplinary work,” remarked Wendrich.

Wendrich is highly complementary of IDRE staff members, who have supported her in her research endeavors “from beginning to end.” She applauds IDRE’s visualization and modeling expert, Lisa Synder, who is always able to keep projects on track. “Lisa Synder has been extremely helpful in advising about three dimensional and virtual reality aspects. Also, she’s an amazing project manager,” Wendrich said.

GIS Coordinator Yoh Kawano has also helped Wendrich immensely on a wide array of research projects. “Yoh has such a knowledge of spatial-based information and is such a creative thinker in how to bring that information across. He has developed these interfaces that are extremely useful for research, education and outreach,” Wendrich noted.

Finally, Wendrich showers OIT web team manager Chris Patterson with praise. “Chris is an amazing programmer and coordinator of other programmers, including student programmers that I hire to work on different projects. She’s very insightful, very patient, and extremely dedicated.”

“The most important resources are the people, people like Lisa, Yoh and Chris. That expertise – the GIS expertise, the 3D/Virtual Reality expertise, the programming expertise, the design expertise – is essential. It’s people with that knowledge that are really geared toward collaboration, and we don’t have enough of them!” Wendrich exclaimed.

Although she has a full plate, Wendrich is still hungry for new opportunities for collaborative research. “I really hope to develop a robust digital platform for archaeological data … It’s a collaboration with the Library, and Chris [Patterson’s] expertise will be drawn into that. We’ll be talking to the Mellon Foundation for funding. That’s the next big step,” said Wendrich.