Creating a realistic rendering of the human body is hard enough. It would be modest to say Dr. Hong Zhou has turned this challenging task into one that is macroscopically more difficult: the creation of 3D structural studies of biological complexes as small as microbes.

To put that in perspective, the human body is made up of around 100 trillion bacterial cells. In pursuing his goal, Zhou, UCLA professor in the Department of Microbiology, Immunology, and Molecular Genetics, had his work cut out for him. 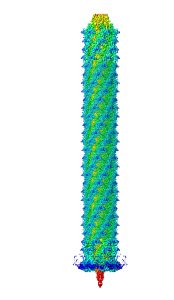 An image of a three-dimensional model of pyocin, a “biological missile” used by bacterial cells to destroy the membranes of healthy cells. Professor Hong Zhou collaborated with Professor Jeff F. Miller on a paper related to pyocin titled “Atomic Structures of a bactericidal contractile nanotube in its pre- and postcontraction states.”

“Very small things turn out to have a very large impact on human health and human diseases,” he said. As a microbiologist, Zhou, who also serves as director of the Electron Imaging Center for NanoMachines, has studied diseases like cancer and the herpes viruses including shingles, which he had a recent bout with and describes as an extremely painful byproduct of growing older.

Understanding the structure of viruses and bacteria that cause disease has the potential to alleviate such medical ills. Zhou does so through processes known as cryo-electron microscopy (cryoEM) and cryo-electron tomography (cryoET). Both are imaging techniques used to produce high-resolution three-dimensional images of samples that can be observed at the nanometer scale, or one-billionth of a meter. This involves terabytes of data generated by users of Zhou’s facility each day. Through the computational resources offered by the Institute for Digital Research and Education (IDRE), Zhou said the process of taking an average of 200,000 to 1 million two-dimensional images to map the structure of a biological complex into a three-dimensional form becomes much simpler.

The jump, from two to three dimensions, involves the use of technology originally developed for gaming: graphics processing units, or GPUs. Taking thousands of images, a GPU-based computer farm, or collection of computer servers, can process and display a three-dimensional graphic about 100 times faster than a high-end CPU-based cluster. This begs the question, why go through all of this work in the first place? What are the real-world applications through the knowledge of the 3D structure of something so small that it’s impossible for the human eye to see?

One answer comes in the potential for industry application. Zhou discussed his collaborative project with UCLA microbiologist Dr. Jeff F. Miller on pyocin as an example. He described pyocin as a “biological missile” utilized by bacterial cells to puncture and destroy healthy cell membranes. Yet researchers see a way to turn bacterial cells offense against them. Pyocin knows to attack cells because of receptors on their surface, but Zhou said this can be changed so that they only recognize and attack bacterial cells.

“We can think about atoms as bricks in the atomic scale; you can change them atom by atom in the same way you can change a building brick by brick,” he said.

Outside of the practical applications the 3D structural studies have, Zhou has a purely educational interest in simply learning how nature works. For example, he has studied the ways in which pyocin has a very similar process to a grenade launcher. In the same way that the launcher uses a trigger that releases a firing pin that throws a grenade, a portion of pyocin, known as the “ripcord,” propels forward a needle-like structure that punctures the membrane of the cell.

Ultimately, he said an understanding of biological structure benefits both academia and industry. This symbiotic relationship is one of the things that excites him most about his work.

“We need to understand the process to advance in areas of practical implementation,” he said. “Likewise, with engineering we can learn from the applied modifications to gain a better understanding of structure.”