You are here: Home / Featured / Scholar Explores Ways the Humanities Incorporates the Use of Data 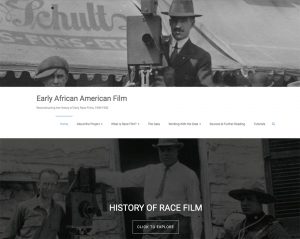 Halfway through earning her doctorate degree in film studies and American studies at Yale University, Miriam Posner’s academic interest in data flourished during a hiatus from school. Posner, coordinator and core faculty at UCLA’s Digital Humanities Program, took a break from books and worked at the Museum of the Moving Image in New York City. Her curiosity about the museum’s collection catalog grew and she developed a new understanding of data.

“For the first time I realized that the way you describe things as data has an effect on how you think of them as objects,” said Posner, who serves on UCLA’s Institute for Digital Research and Education’s (IDRE) Humanities, Arts, Architecture, Social and Information Sciences Collaborative (HASIS). “And the way that different objects get connected to each other has an effect on the kind of knowledge you can derive from a database.”

Upon her return to graduate school, Posner said she doubled down on learning technical skills and joined Yale’s Instructional Technology Group. By the time she graduated she had the skills necessary to take on a post doctorate position at Emory University where she helped to build digital scholarship programs, which then led her the digital humanities at UCLA.

Each spring she embarks on a different collaborative project with her students. This year’s project involved creating a database of early race films, films made during the first half of the 20th century for African American audiences that featured African American casts, using the extensive resources of UCLA’s George P. Johnson Negro Film Collection. Posner said her interest in early race films began while studying silent film in grad school and the project grew in part out of the dearth of African Americans nominated for an Oscar at the 2016 Academy Awards. The project documents the actors who appeared in early race films, the companies associated with the films, and the films themselves, in an effort to build out a database that scholars can use for visualizations and mapping.

In addition to the annual collaborative projects with her students, Posner has a personal project that involves whether or not humanities data actually exists.

“I think I’ve come as far as articulating the ways in which data is a very confusing term for humanities scholars,” Posner said. “The way that humanities scholars think about their evidence is very different than the way a scientist for example might structure their data to fit into a spreadsheet or a database. I’ve been just trying to articulate the points of tension so that when we do things like work with databases, we can do it with a lot more nuance.”

She uses the early race film database as an example of ambiguous humanities data. Many people in the database have names and even races that changed over time. For example, Noble Johnson, a prominent early African American actor, moved at a certain point from being black to white after deciding to “pass” as white.

“Our database isn’t sophisticated enough to capture that complexity,” Posner said. “There is way more ambiguity than we could meaningfully record in the database so we’re thinking a lot about how we can convey to people that we’re not getting everything, but we’re getting broad strokes that might nevertheless be useful.”