You are here: Home / Featured / The Sky’s the Limit for UCLA’s Mobility Expert 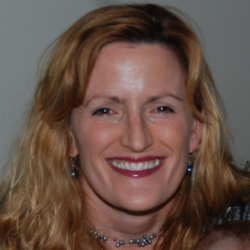 Rose Rocchio, the Director of the Educational and Collaborative Technology Group at UCLA’s Office of Information Technology (OIT), is driving technological innovation in the mobile space. Rocchio discusses why she’s passionate about mobile technology, how she orchestrated UCLA’s transition to mobile and what participants can learn about at the upcoming Mobility and Modern Web Conference (MMWCON) at UCLA.

An Entrepreneur at Heart

After earning a bachelor’s degree from MIT, Rocchio worked in the consulting world for eight years. She later decided to pursue an MBA at UCLA’s Anderson School of Management focusing on marketing and entrepreneurship before founding a travel start-up company.  “After 9/11 the travel business was on the fritz for a solid year. It was the time to move on, so I accepted a position at UCLA,” she explained.

Endowed with entrepreneurial spirit, Rocchio has played a key role in positioning UCLA at the forefront of technology.Over the past 12 years at the university, she has worked on several ambitious projects. She and her web team have created custom content management systems for academic and research units on campus, developed a number of academic personnel projects, ran the UCLA on iTunes U effort and helped create CCLE. Most notably, Rocchio was responsible for the development and deployment of UCLA’s Mobile Web Framework, which was used to build UCLA Mobile.

“In 2009, we embarked on the mobile effort. We surveyed what was out there, and there was one mobile framework that looked appealing, which was built by MIT.”

After studying MIT’s mobile framework more closely, Rocchio and her team realized it was too centralized to work effectively at UCLA.  “MIT’s framework depended on all the services being on a single server, which was not culturally going to work at UCLA. We’re just too big. We wanted to create something that was really lightweight so everyone could leverage it.”

Rocchio assembled a team of web designers, database managers and software experts from departments across the campus to produce a device agnostic, platform independent and easy-to-use framework for the mobile web. The result, known as the UCLA Mobile Web Framework, is available for download free of charge and is designed to work on all types of mobile devices.

While the Mobile Web Framework was started at UCLA, it has blossomed into a collaborative, multi-campus initiative. Four other UC campuses – Berkeley, Santa Barbara, San Diego and San Francisco – have all used the innovative framework while additional ones have utilized it for pilots such as Irvine and Riverside.

“MWWCON is about bringing together the mobile community of Los Angeles and beyond. We welcome enthusiasts of technology that want to collaborate and learn how to use open source technologies,” said Rocchio.

Attendees at MMWCON will have the opportunity to network with web developers, technologists, educators and researchers as well as learn about the latest trends of the modern web, including modern web technologies, data collection, interoperability and gamification.

Presenters will focus on several of the top technology trends dominating 2014, such as gamification, which is the concept of applying game mechanics to non-game processes to encourage participation and engagement. Fast food companies, airlines and mobile phone providers have all used this unique strategy for a number of years, and research company Gartner predicts that by 2016 gamification will be an “essential element for brands and retailers to drive customer marketing and loyalty.”

“By creating games or challenges, we can change the nature of how people feel about something that would otherwise be very dull,” Rocchio noted.

Another important topic of MMWCON is responsive web design (RWD), a design approach that gives users an optimal viewing experience across a wide range of devices. Websites designed with RWB have the ability to resize themselves across all types of screens. With thousands of different devices, browsers and platforms available on the market, RWD is the current gold standard of mobile design.

“We started thinking about responsive design in 2011 when tablets came on the market and became really popular as a device for students and faculty,” said Rocchio. “If you’re in higher ed and you know that 95% of your target population has a smartphone device, then responsive design is the choice scenario because it gives you the ability to provide users with the best experience possible across all of these different screen sizes.”

Most excitingly, MMWCON attendees will have the opportunity to learn about CASA, which stands for Community App Sharing Architecture, an open source (as in freely available) “app store” that Rocchio and her team have been developing for the past year. With CASA, Rocchio hopes to democratize the app store world by building a network of application sharing environments so technology giants can no longer take 30% of all revenue in the mobile app commercial space.

“Apple and Google have made everybody understand how to go get an app. They have consumerized the acquisition of software. There are a million apps in the Apple App Store and just over that in the Google Play market that are curated by those two commercial giants,” noted Rocchio. “CASA allows any organization or business to publish their mobile applications without having to go through companies like Apple or Google. They can essentially create their own app store offering.”

Code for the Mission

Also at the conference, the winner of Code for the Mission App Competition will be announced. Organized by OIT and UCLA’s Office of Intellectual Property, this competition aims to encourage and engage UCLA students, staff and faculty in the development of mobile apps that help further UCLA’s mission of Research, Education and Service.

“Code for the Mission was meant to be the antithesis of a hackathon. The idea was to engender long-term collaboration instead of these short-term all-nighters. Unlike hackathons, which are student friendly, Code for the Mission is faculty friendly,” Rocchio noted. “There are so many amazing faculty members with these rich treasure troves of data. If you can build an app that would make that information available to the public, you gain the ability to educate and make an impact. That was the impetus.”

Rocchio anticipated long ago that hand-held devices would change the world, and she is very enthusiastic about the future of mobile technology both in and out of the classroom. “If you leave your wallet at home, usually you’ll go back for it. But if you leave your phone at home, you will always go back for it because you’re no longer connected,” she explained. “Your phone is your communication channel. It is the information consumption device, so companies or organizations that don’t have a mobile strategy at this point are behind the curve.”

While mobile phones have empowered users, Rocchio points out that they have also greatly empowered those working in the technology sector. “Mobile phones have increased the potential for impact that technology professionals have on the world,” she noted. “As technologists, what we do is in people’s hands, and it greatly affects them. That’s what’s really exciting to me.”

In the future, Rocchio plans to continue developing new ways to leverage mobile technology for higher education and hopes to initiate more collaborative projects between the UCs.