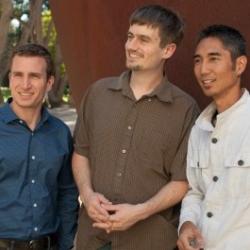 Todd Presner, David Shepard, and Yoh Kawano recently published the book, HyperCities: Thick Mapping in the Digital Humanities with Harvard University Press. Presner, Chair of UCLA’s Digital Humanities Program and Professor of Germanic Languages and Comparative Literature, is the founder and director of HyperCities. Kawano, Campus GIS Coordinator for IDRE, and Shepard, Lead Academic Developer at the Center for Digital Humanities, have also played key roles in developing and expanding the unique digital platform. In this interview, the three authors discuss the history of the online project, the details of the book, and what’s next for HyperCities.

HyperCities is a crowdsourced, digital mapping platform that allows users to travel back in time and explore the historical layers of city spaces. Universities, cultural institutions, libraries, community advocacy groups and students from around the world have all contributed multimedia content – broadcast news, videos, essays and 3D reconstructions – to the web-based application. Using the platform, people can explore metropolises across the globe, including Los Angeles, Rome, Berlin and New York, and HyperCities partners are currently developing content for many more cities.

The “HyperCities” book explains the ambitious digital platform of the same name and describes thick mapping, which Presner defines as “the humanist project of participating and listening that transforms mapping into an ethical undertaking.” The authors look at the media archaeology of Google Earth and study the cultural-historical meaning of map projections. They also investigate recent world events, such as the 2011 Tohoku earthquake and tsunami as well as the Arab Spring, via social media mapping.

“HyperCities started with Berlin in the mid ‘90s and in thinking about sites of memory and erasure in public spaces. Berlin is a city, like many other major cities, that had a very traumatic twentieth century,” Presner explained. “I was interested in the way city spaces are marked or unmarked. I wanted to come up with a way to map and narrate stories that are not visible in the urban environment.”

Presner, who first conceptualized HyperCities while a graduate student at Stanford, came to UCLA in 2001 and collaborated with the Center for Digital Humanities (CDH) to expand the fledgling platform. In 2008, the HyperCities team won a “Digital Media and Learning Grant” from the MacArthur Foundation to further develop the project. The funding brought in community partners, scholars and universities from across the globe.

In 2009, Kawano and Shepard joined the HyperCities team. “When they came on board, the project took a number of new directions,” said Presner. “David and Yoh initiated social media mapping, and this was not something that we had done prior to that. We didn’t have the technologies to harvest or visualize the data until these guys joined the project.”

An Offer They Couldn’t Refuse

After giving a presentation about HyperCities at Harvard University, Presner, Shepard and Kawano were invited to write a book about the digital platform.  “Jeffrey Schnapp, the director of metaLAB at Harvard, came and talked to us about a new academic publication – one that was graphically designed and aimed to appeal to a broad audience. It was meant to be visually stimulating, but it was also meant to be a build of a digital platform in print,” said Presner. “With the book, we took a digital project and translated some of the concepts into a print form, which stabilized them to some extent. We also played with the form of print in some very intriguing ways.”

Presner, Shepard and Kawano took hours deciding how to design and assemble the book.   “We spent a lot of time thinking about the structure of the book. From the beginning, we knew it wasn’t going to be a straight-through essay, as many academic works are. It was going to have interventions, interjections and snippets,” said Shepard. “For example, the book includes code modules that parallel the main text. It also features design elements that Yoh assembled. We put together a very graphical narrative.”

Kawano noted, “We spent an endless amount of time talking about the design of the book. That was partially because of the diversity of the team and also due to the nature of the book – it’s about humanities, a diverse field with many actors and players. That is really reflected in the book; there are several different fonts, different authors and different designs.”

While Todd, Dave and Yoh are the primary authors, several distinguished scholars also contributed to the book, each writing a “project window.” “Community partners Reanne Estrada and Mike Blockstein wrote a window on LA’s historic Filipinotown. Diane Favro and Chris Johanson did a window on ancient Rome. Xarene Eskandar contributed a window on mapping the 2009 Tehran election protests, and Philip Ethington contributed a window on LA as a ghost metropolis. If you go to the book website, you can discover even more authors of related mapped projects,” said Presner.

When they published their book, Presner, Shepard and Kawano also launched a companion website featuring projects constructed using the Hypercities concept. “The original HyperCities website is more of a platform that leveraged different technologies for research and scholarship. The book website is a culmination of the concept of HyperCities in its many different forms. The website highlights some of the best projects built on the HyperCities idea,” explained Kawano.

On the HyperCities book website, one can find much interesting content: presentations given by the authors, visualizations from the book, social media maps as well as the source code for HyperCities.

In the future, Presner, Shepard and Kawano hope to use the HyperCities project for educational and research purposes. “We’ve released the HyperCities source code, and we are hoping that it will attract interest in the open source community. We’re trying to decentralize HyperCities so that people can build their own hypercities,” noted Shepard.

Kawano added, “HyperCities is, in general, about the past. Today we’re looking at projection and using social media to do real-time analysis of global events. We talk about this in the book through what happened in the Arab Spring and what happened in Japan. Perhaps the next iteration of Hypercities is the study of global events through social media and traditional media.”

While Kawano anticipates using the platform to study global events in real-time, Presner seeks to use HyperCities in higher education. “Yoh and I are involved in a new initiative at UCLA called Urban Humanities, and a lot of the methods that we’re using are really coming out of thick mapping. The concept of thick mapping has a big afterlife in a lot of different disciplines.  As we develop a graduate curriculum in urban humanities, we hope to build off some of the ideas from the HyperCities digital project. That’s the next step with collaborators across campus in architecture, urban planning, and communication studies.”