Dr. Anastassia Alexandrova is living in a materials world; she is concerned with the study of new chemical materials through the use of computational design and multi-scale modeling.

To Alexandrova, associate professor at UCLA’s Department of Chemistry and Biochemistry, the most interesting questions in science are related to the electronic structure and chemical bonding of materials. Through collaboration with experimental laboratories, these concerns are directed toward figuring out how functional materials, or materials which possess specific native properties or functions of their own such as magnetism or energy storage functions, work. 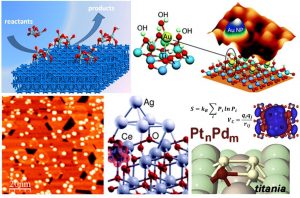 The image reflects research on theoretical description and design of heterogeneous catalytic interfaces: semiconductor surfaces decorated with small clusters of transition metals. It is essential to model these catalysts in a realistic way, i.e. in conditions of high temperature and pressure, because their structure and properties are in turn dependent on the conditions. The work is done in close collaboration with operando characterization experiments, exemplified by the STM image on the bottom left.

“Fundamental research goes into understanding how they work so we can make a step toward designing special systems that are more efficient,” she said.

She goes about designing such materials systems, an enhancement of texture mapping that allows for objects in 3D modeling packages and video games to simulate different types of materials in real life, through a mixture of computation. She uses methods such as calculus and multiscale modeling, a style of modeling in which multiple models at different scales are used simultaneously to describe a system.

Such research can have a huge impact. For example, Alexandrova spoke about modifying the properties of a material in order to make it super hard. Such a modification can be used in creating tools that cut.

“People were interested in hard materials since prehistoric times, when first picking up a stone in order to crack a nut or kill an animal,” she said. “Not much changed, we still want tools, but to cut other things.”

Alexandrova, a member of the Institute for Digital Research and Education’s Executive Committee, grew up predisposed to a scientific school of thought. She was surrounded by a family full of physicists, chemists, and mathematicians, including both her mother and father who worked as physicists and her grandparents who have postgraduate degrees in math and biology, respectively.

She said that the poverty torn country she grew up in provided her two options: Making minimal pay as a professor or pursuing a career almost entirely unrelated to science. She said an industrial career was a possibility, however, in post-collapse Soviet Union, the overall state of industry had a gloomy atmosphere that lacked any promise.

Alexandrova arrived in the United States from Russia in 2001, and made her way to UCLA as a faculty member in 2010, with a stop first at Utah State University for her Ph.D. and then a postdoc at Yale University.

“To continue doing what I loved and to be able to survive, I had to go abroad,” she said. “To me that is a big part of what America is: you can come from nowhere and build your career.”

And build her career she has. Recent awards include a prestigious Fulbright Scholar award, a Rising Star Award from the Women Chemists Committee American Chemical Society, and a National Science Foundation Career Award.

Perhaps the most significant real world application of her research includes energy and medicinal applications. Many industrial applications require catalysis, or the acceleration of a chemical reaction by a catalyst. It is always desirable to have more effective, and particularly more selective, catalysts that would lead to the production of just one specific product rather than a mix.

Alexandrova and experimental collaborators create new ways to achieve this goal, through insight into the electronic structure of catalysts in operating conditions. These conditions can be captured computationally only at the multi-scale level, calculation of material properties or system behavior on one level using information or models from different levels.

This is why Alexandrova’s group is a heavy user of supercomputing resources. Alexandrova specifically mentioned the Haber-Bosch process, which is a catalytic process of mixing gaseous nitrogen with hydrogen to produce ammonia. Ammonia can be converted into valuable organic compounds that benefit the earth.

“It’s a process that feeds the planet, it produces fertilizer, but it’s extremely energy consuming because of the high temperature it requires,” she said. “If you can find a catalyst that would operate at milder conditions you can make a huge environmental impact.”

She also designs artificial enzymes such as novel artificial metallo-enzymes and metallo-cluster enzymes. Enzymes are protein macromolecules that are very efficient catalyst. Alexandrova hopes to use this natural process to catalyze processes that interest humankind, such as enzymes that could help create new medications.

“This is very valuable for industry because oftentimes the drugs that scientists come up with have very complicated structures, so organic synthesis becomes very complicated and you use energy on a lot of extra steps,” she said. “You can save billions of dollars by making it more efficient.”

Materials and their potential appliances seem to constantly be on Alexandrova’s mind. She ultimately contributes this to her scientific upbringing.

“The way they thought was so specific that you end up constantly thinking in this way,” she said. “On one hand, I see a huge field in which understanding is still very inhibited, but there are so many different applications that can have an impact.”