You are here: Home / News / On the Mind: Grant Seeks to Understand the Brain

Getting inside a person’s head is no longer just the stuff of telekinetic comic book characters—the recently announced National Science Foundation’s Next Generation Networks for Neuroscience (NeuroNex) awards help to fund real scientists and their research into the interworkings of the brain.

Through NSF funding, one of nine NeuroNex Technology Hubs will be established at UCLA, which includes the work of several Institute for Digital Research and Education (IDRE) collaborators including the grant’s Principal Investigator Dr. Peyman Golshani, associate professor of neurology and psychiatry at UCLA’s School of Medicine. 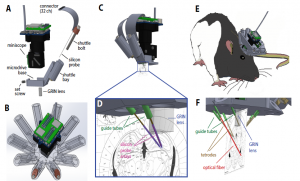 The $1.83 million grant is the first portion of an almost $8.4 million award to the project, whose other major researchers include:

The project’s research examines the brain from a diverse set of scientific fields. Golshani explains the funding as a pathway to pursuing multiple, interrelated neuroscience initiatives.

For nearly three years, Golshani has been involved in developing miniaturized fluorescent microscopes that are less than four grams in weight and can be put on the heads of laboratory mice and rats. Originally developed at Stanford University, the microscopes take advantage of calcium levels to flash a light when a brain cell becomes active and then record the electrical activity of swaths of cells deep in the brain.

“The process gives us a window into how large numbers of neurons are working together to create behaviors and what goes wrong in these models,” Golshani said. “With this we can study disabilities like epilepsy and autism.”

The miniature microscopes are also unique in that they are one of the first techniques that allows researchers to look at the same group of cells over a period of time to see how neurons change when an animal learns or develops in specific ways.

Outside of miniature microscopes, other projects UCLA’s NeuroNex Technology Hub will embark on include the design, manufacture, and distribution of silicon multielectrode probes, as well as new computer systems capable of analyzing brain activity pattern data within small fractions of a second, and a “light field miniature microscope” that will allow investigators to make 3-D movies of brain activity.

In addition, the grant allocates funding for workshops that will teach scientists how to build the devices as well as instruct K-12 and college students about how the technology functions. The researchers plan to partner with UCLA’s Maximizing Access to Research Careers program and the UCLA Center for Excellence in Engineering and Diversity (CEED), in order to involve a highly-diverse base in the research.

“I want our research to inspire many different kinds of people to fall in love with science,” Golshani said.

All of the technologies developed by the NeuroNex Technology Hub will be openly shared through the Miniscope Wiki website, to allow other laboratories to make ready use of the research. Golshani said that over 250 laboratories have already made use of the first generation microscopes with more than 1,300 having been built and used.

“Hundreds are already making use of our research,” he said. “The impact is much more than I ever thought.”