You are here: Home / News / The Prince of Publications

You might think of Professor Kendall Houk as the Shonda Rhimes of Organic Chemistry. Like Rhimes, the writer/producer known for her steady stream of hit television shows including “Grey’s Anatomy” and “Scandal,” Houk is also known for his prolificness but in publication; he averages around 20 papers a year.

Houk, who began teaching at UCLA in 1986 and has served as UCLA’s Saul Winstein Professor of Organic Chemistry since 2009, has published more than 1,000 papers since his first, more than half a century ago. In 2014 alone, he published 58 papers and attributes his high-volume output to the support he receives from the 25-30 collaborators that make up the Houk Research Group. 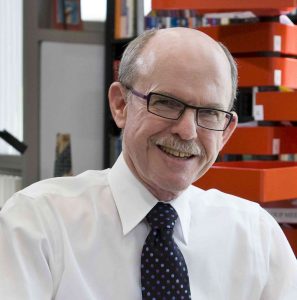 In a career that has spanned more than half a century, Professor Kendall Houk has produced more than 1,000 academic papers.

“I’ve always pushed pretty hard on publishing,” said Houk, who is also an Institute for Digital Research and Education (IDRE) collaborator. “It’s like a movie: if you’re just thinking about it you’ll never get it made.”

He describes his switch from experimental work as a graduate student, to computational work on computers, as a gradual process that began when he first started teaching.

In 1968, after receiving his A.B., M.S. and Ph.D. degrees at Harvard University, Houk was hired as an assistant professor at Louisiana State University. It was there that undergraduate students expressed interest in a research project related to computers.

Computing technology was still very much in its infancy and more than a billion times slower than modern day machines. With the help of a staff member whose job it was to help people do computations, Houk took on one of his first computational projects, calculating the frontier molecular orbitals of molecules. He said as time went on he learned more and more about computational work as chemists became more interested in theory and technology advanced.

“I was there riding the wave as it swelled,” he said. “It’s not like I knew anything (about computers) right when I started, but I was there.”

Nowadays, Houk, who served as Director of the Chemistry Division at the National Science Foundation from 1988 to 1990 and chairman of the UCLA Department of Chemistry and Biochemistry from 1991-1994, has plenty of projects to keep him busy.

One of his current projects is one that seeks to better understand enzyme catalysis. Enzymes are proteins that accelerate chemical reactions. Through the use of computations that create modifications in proteins, Houk has been able to generate brand new chemical reactions. Potential real world applications include a catalyst capable of drug or organic photovoltaic production at a very low cost.

Some of the new enzymes developed have worked while others have not. Houk said it’s simply a matter of running computations and testing hypotheses to figure it all out. Ideally, the result would be computations that could be used to help molecular biologists produce any kind of molecule one might want.

“That’s the goal and we’re slowly, but surely, creeping towards it,” he said.

Alongside two to three dozen collaborators in his group, Houk is working toward more than just one goal. The researchers he works with range from undergraduate students to Ph.D.s, from in state to international. To keep track of all of his projects, he compared himself to a film producer.

“I get involved to some extent with everything, but I’m most involved at raising funds and then at show time when we are actually writing the paper,” he said.